My experience with the Sony WI-1000X

In October 2018 I bought the Sony WI-1000X wireless headphones for 206 Euro with shipping.

I had learned from my mistakes with the Bose QC25. Namely that the cable was awkward boarding planes and while dressing up. That the on-ear QC25 were uncomfortable while sleeping in a plane seat. And that the post-sales Bose customer support "had room for improvement".

So I was looking for something new. The Sony noise cancellation was supposed to be top notch and my eye fell on the WI-1000X. When I bought it, it was one of the very few headsets that supported high quality LDAC Bluetooth codec.

When I got it, it was amazing. The sound quality was impecable for anything I had heard in this price range. Not quite as good as the bulky, non-insulating HD650 monitors, but close. If you want to see a good summary of the sound quality and noice cancelling performance check out https://www.rtings.com/headphones/reviews/sony/wi-1000x-wireless
I don't fly as often as I used to, but if you have worked with me in the last few years you probably noticed that I alwas have a pair of headphones hanging over my neck.

Do they have room for improvement? 1.5 years later I am still not aware of any better headphones for this use case (read as: I recommend them). They sound a class better than the 1MORE triple driver Bluetooth headphones.
I would have preferred a flexible silicon strap on the back instead a rigid bar, so they break less easily. And maybe faster charging. Because of Bluetooth limitations I can not connect the WI-1000X to the laptop and to the phone at the same time. And because it is time consuming to switch I usually have one pair of headphones permanently connected to the laptop and a second one permanently connected to the phone. It's ridiculous, but that's the state of the art in wireless Bluetooth right now. Windows sound output over Blueooth has its own quirks (I am using an Intel AX200) that are beyond the scope of this blogpost.

The WI-1000X also support wired line-in input. This is great for using it with Subpac. https://twitter.com/MarkusKrainz/status/1143061740755857408
How do they to this? Via a prorietary, passive USB-micro to 3.5mm adapter cable. The microUSB end goes into the headphones. Apparently companies have been doing this even before Type C ( https://en.wikipedia.org/wiki/USB-C#Audio_Adapter_Accessory_Mode_2 )
I almost lost this cable once early 2019 and Sony quoted me 70 Euro for this 1m passive cable replacement (https://at.eetgroup.com/i/191219061-Sony-CABLE-WITH-PLUG-BLK1, Dedicated headphone cable (approx. 1.0 m (39 3/8 in.)))

I am documenting this quirky cable's pinout now, so you don't have to spend 70 Euro if you lose yours. 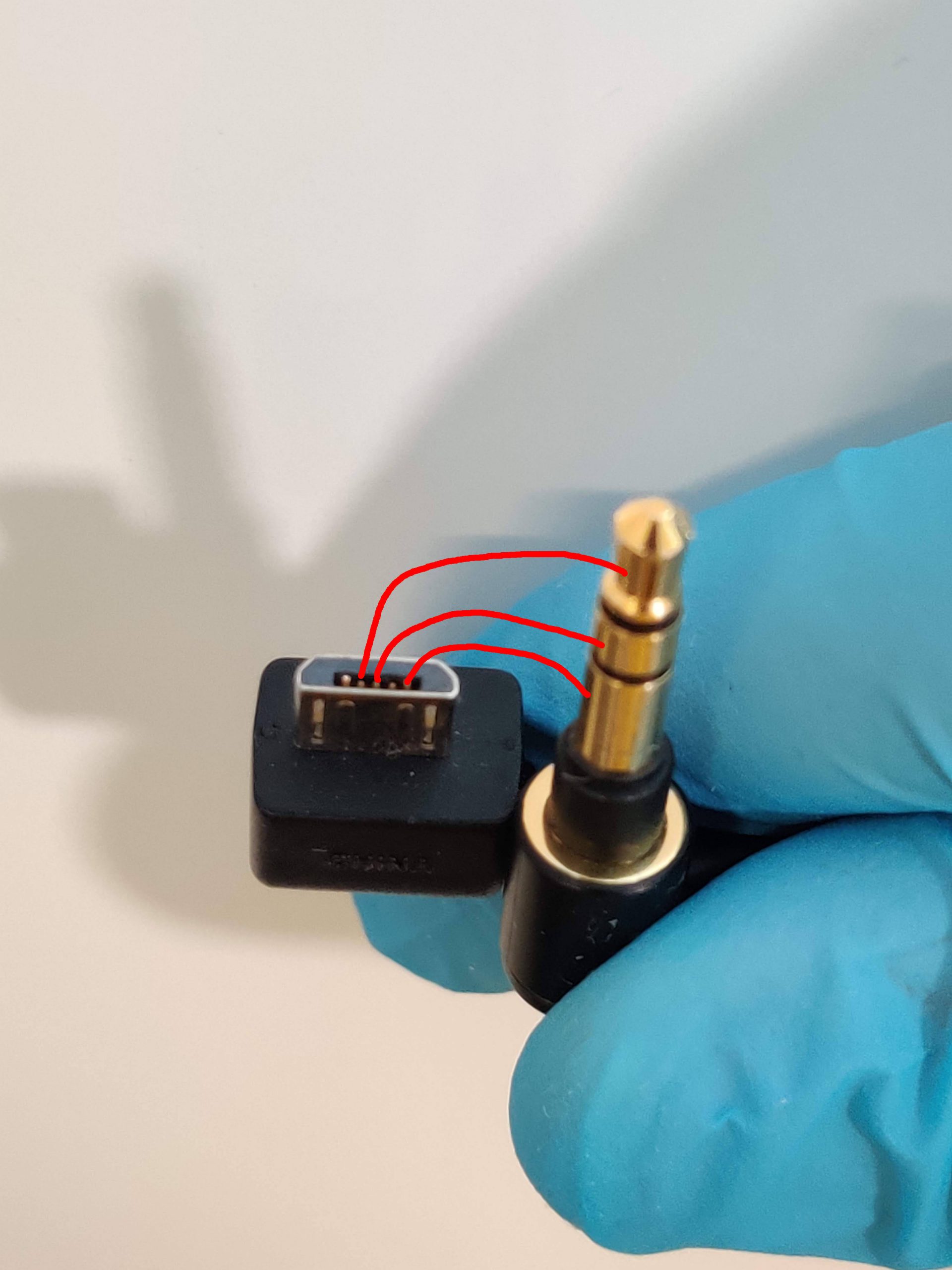 The Vbus (Vcc/Vdd) pin is floating (not connected). I don't think you need any resistors. For the record I have measured 287kΩ between GND and the microUSB's OTG/ID pin, but I don't think that's intentional.